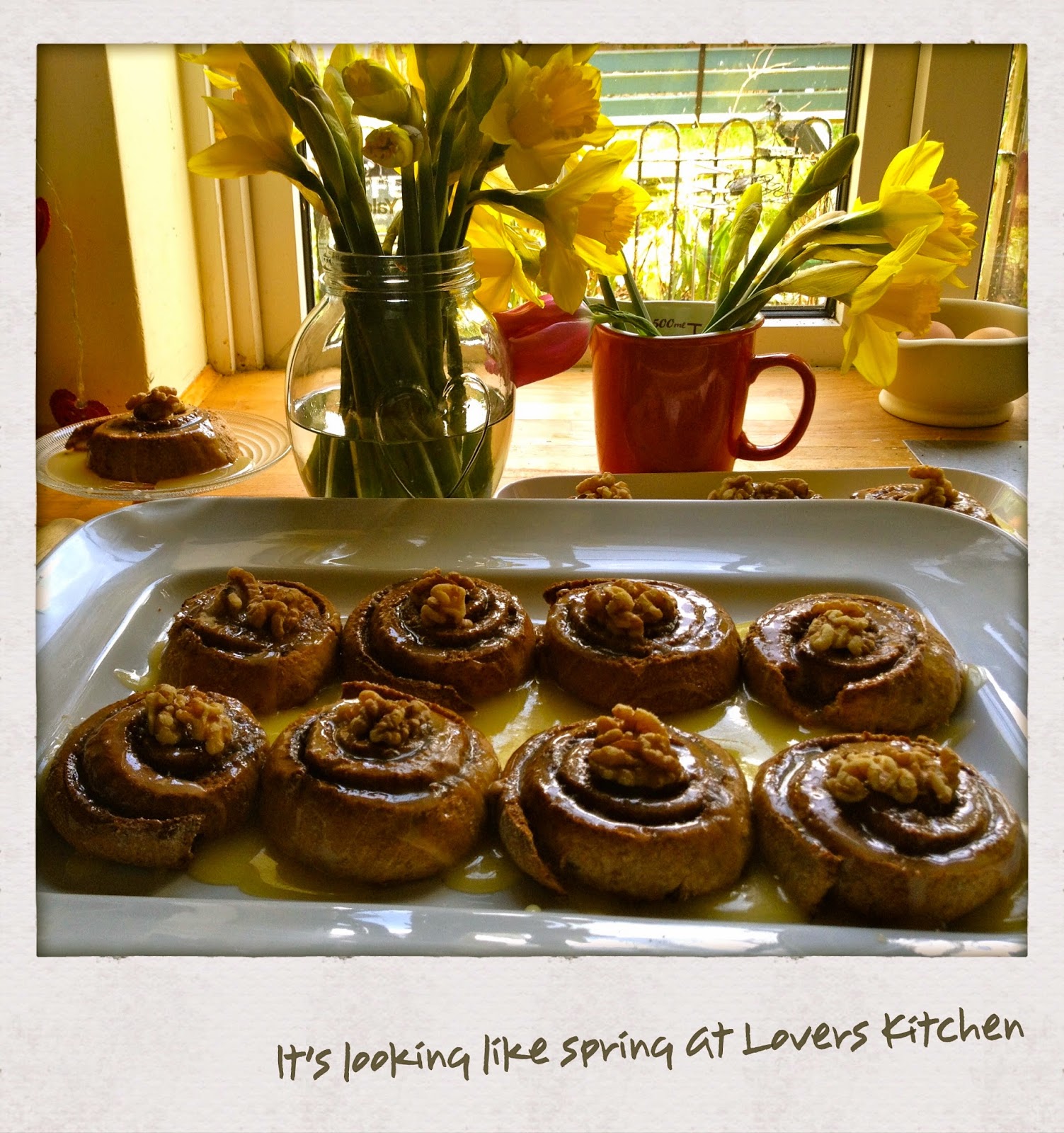 I'm happily drowning in sumptuous cinnamon rolls. I'm giving them to friends who say they're the best cinnamon buns they've ever eaten. Granted, this isn't saying much because England doesn't have America's cinnamon roll culture. I wouldn't be surprised if my treat isn't the only cinnamon buns my English friends have sampled. Of course them being English they’re too polite to say this. Naturally having lived amongst the English for a decade I am too polite to ask.

All of Europe, like most of the world, uses the metric system for measuring. American philistines like myself continue using the imperial system. When I first started writing Lovers Kitchen and asked friends here to trial the recipes, they informed me it was impossible because they had no measuring implements with imperial markings. This is why all my recipes include both metric and imperial measurements. I myself still think in imperial measurements. Fortunately, I purchased measuring implements featuring both markings. I also have a handy converter on my iPhone that I use almost daily.

It's easy to get whole wheat spelt in England as the bread is becoming popular with people who find other breads difficult to digest. A very small loaf can set you back £4. I can make a generous loaf for about £2. I'm not a big baker, but for bread, pizza and cinnamon rolls, I'm always happy to give my hands a good workout. 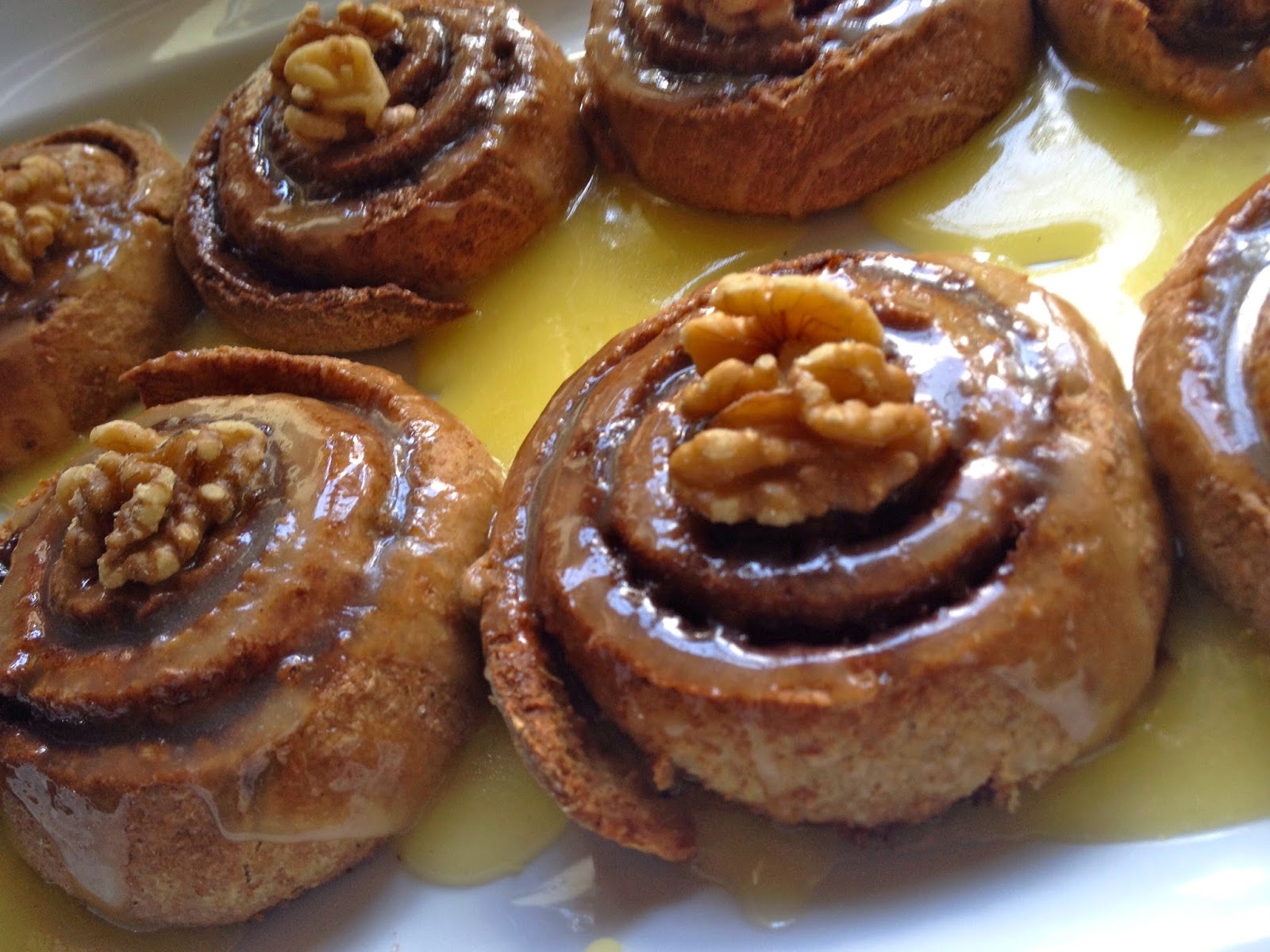 Cinnamon Rolls make the perfect breakfast, brunch or snack. They’re easy to make, fun to share and delightful to unravel and eat with a pot of coffee or tea. They are also wonderfully forgiving, as long as you don’t kill the yeast. Children of all ages love to make them. There’s no sweeter way to share the morning.

In autumn and winter I add a little cardamon essence for flavouring. Come spring and summer I often use lavender essence. Both are equally good, as is the more neutral vanilla.

Whole Wheat Spelt, an ancient Roman grain, is my flour of choice for bread, pizza and rolls. Not only is easier to digest, it’s better for us. It contains high levels of protein, and dietary fiber, along with significant levels of iron, copper, manganese, magnesium, phosphorous, potassium, zinc, selenium, niacin, thiamin, vitamin B6, and folic acid. The more I learn about spelt the more impressed I am. 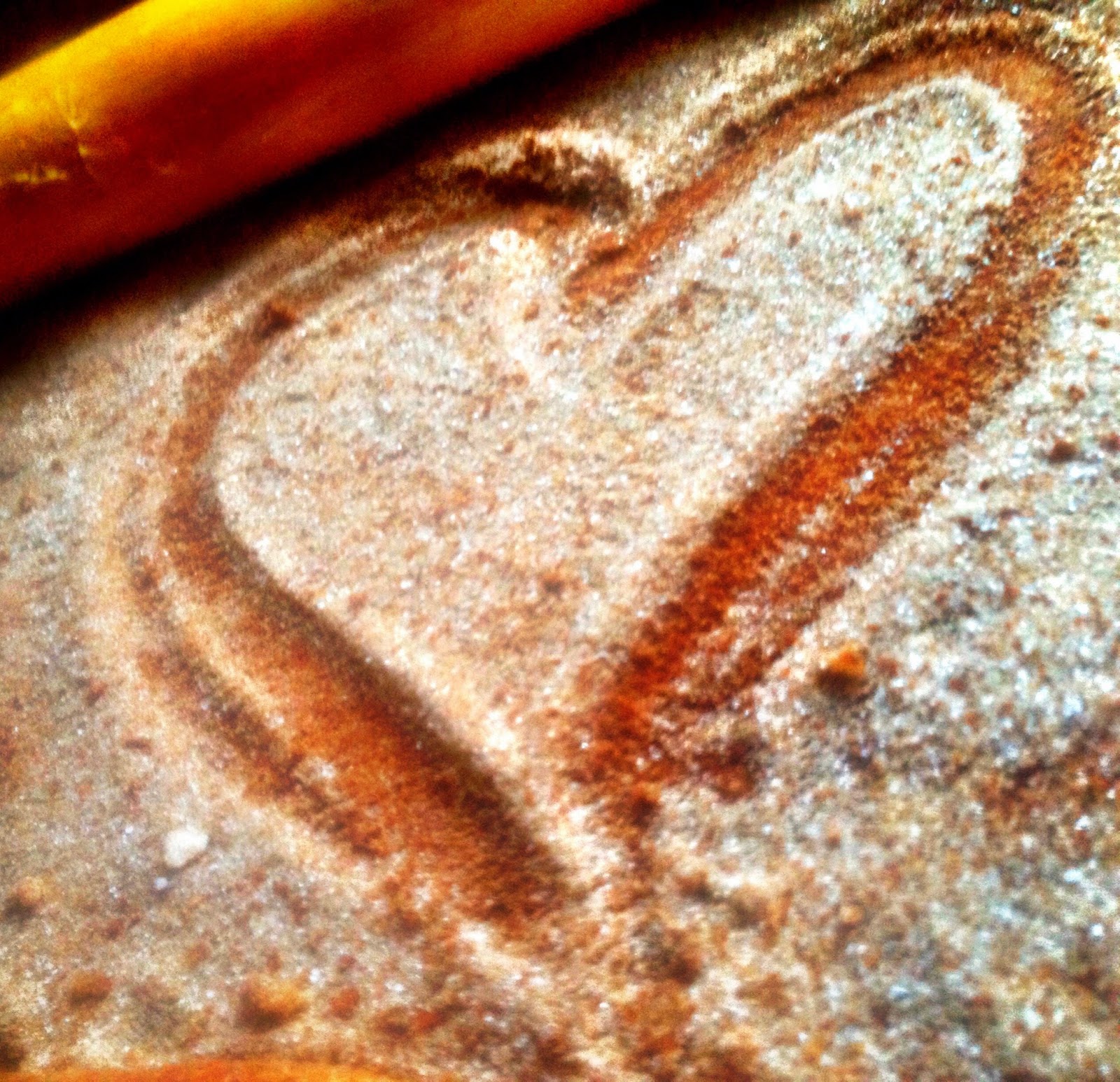 This recipe makes enough dough for a couple dozen cinnamon rolls. I like to make plenty to share with friends and family. If you don’t want to bake them all at once, you can keep the dough on hand in the freezer, or put your ready-made rolls in the fridge for baking up to 48 hours later. This is especially helpful when wanting to treat houseguests to the anticipation of your cinnamony, yeasty confection.

What You Need for the Dough

What You Need for The Filling

Butter - 500g/about a pound, about 2 cups (you’ll use the extra butter here to cover the dough and on the surface when rolling out)
Cinnamon - 250g/9 ounces, about 1-½ cups
Sugar - 600g/1.3 pounds, about 3 cups
You can easily make more if required. Simply combine cinnamon with double the sugar.

What You Need for The Topping 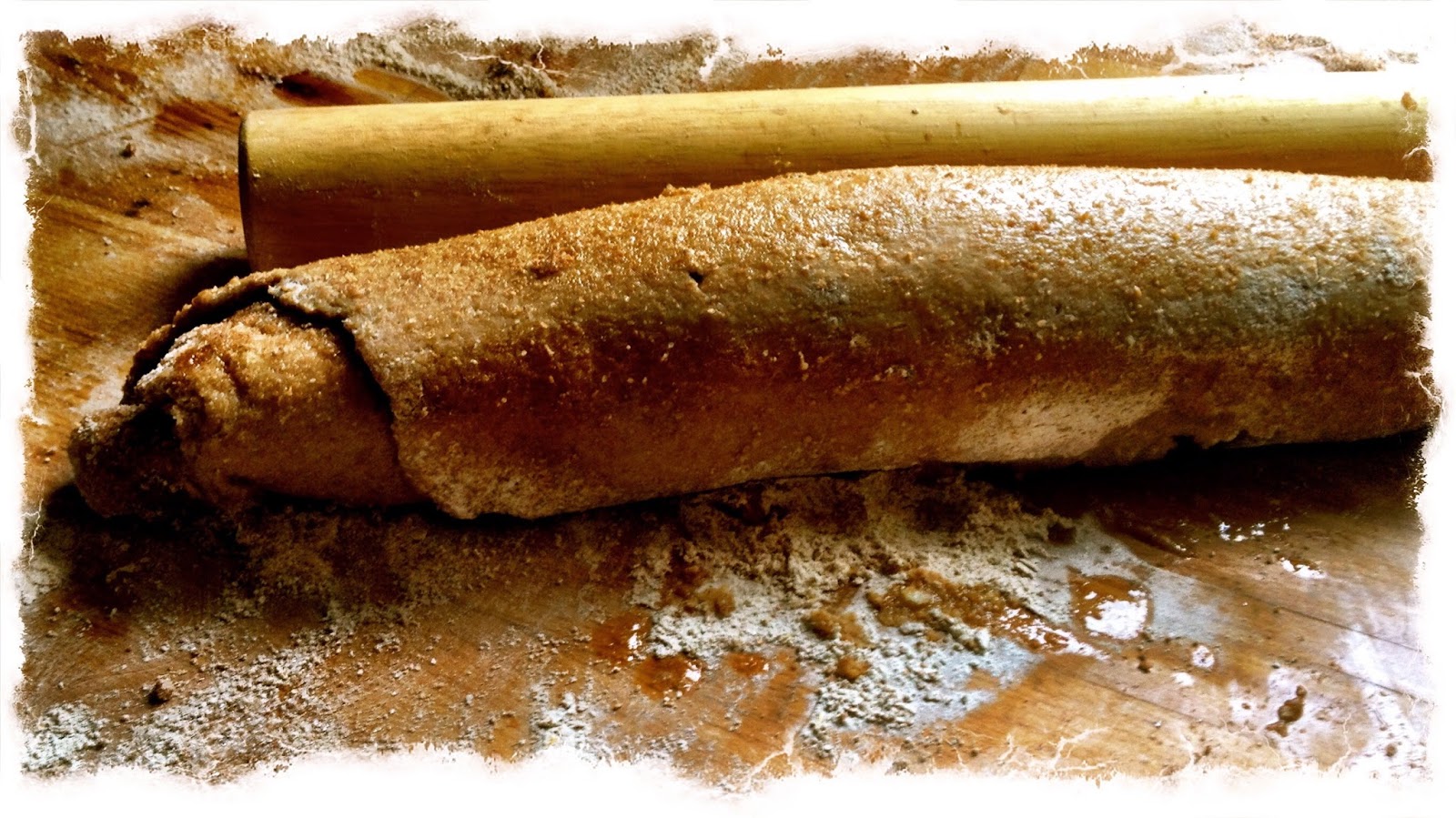 Scald milk by heating in heavy bottom pan over medium heat, with the butter. Scald means to almost reach boiling point. Turn off heat, allow the milk and butter to cool to very warm (not hot) This will take about twenty minutes. Scalding the milk like this will make your buns more pillowy and soft.

When the milk and butter are very warm to touch - but not HOT, or you will kill the yeast - stir in the yeast and eggs with the flavouring. Mix well. Add to the flour mixture. Using clean hands mix thoroughly. Take your time. The dough will feel very dry but keep mixing and mixing until everything is fully absorbed and the dough comes off the side of the bowl.

Form a big round dough ball, lightly cover with a bit of melted butter and a clean tea towel. Allow dough to rest in a warm place for at least an hour. Several hours is even better. Mature dough yields more taste.

While dough is resting, melt butter over low heat in heavy bottom pan. Set aside.

Mix sugar and cinnamon. Set aside. 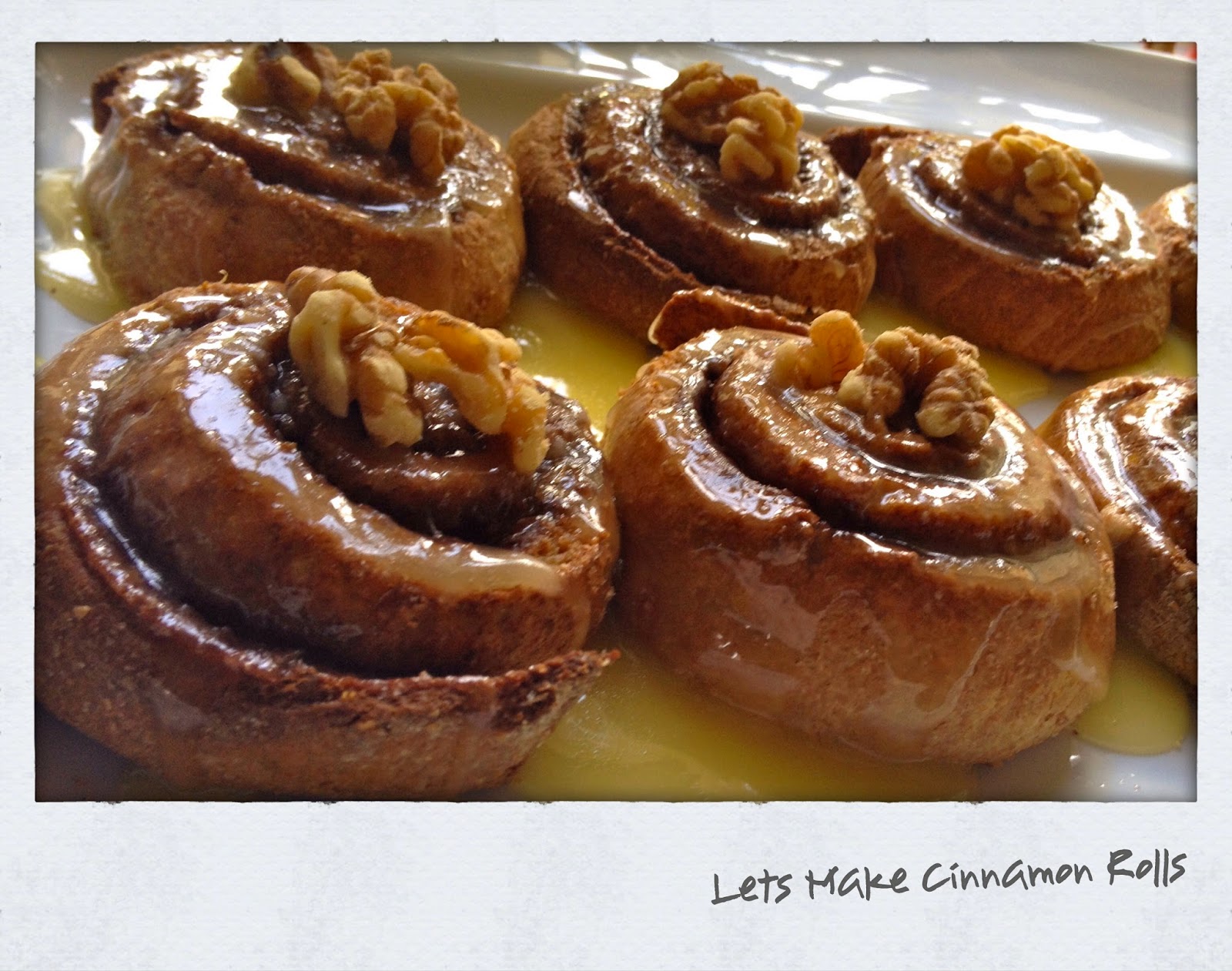 Next you’ll make the icing by combining the melted butter with the icing sugar, milk and flavouring in the same pan your melted the butter in. Mix well. Icing should be on the thin side as you want a light glaze on your rolls. If too thick, add a bit more milk. The icing will thicken as it cools so don’t worry if it seems thin. Set aside.

When you’re ready to roll out your dough, use a little melted butter on the surface and a rollingpin.

Divide the dough into three portions. Each portion will make about eight rolls. If you want to freeze some for later, this is the time to bag up what you want in freezer bags and stash away for another day. 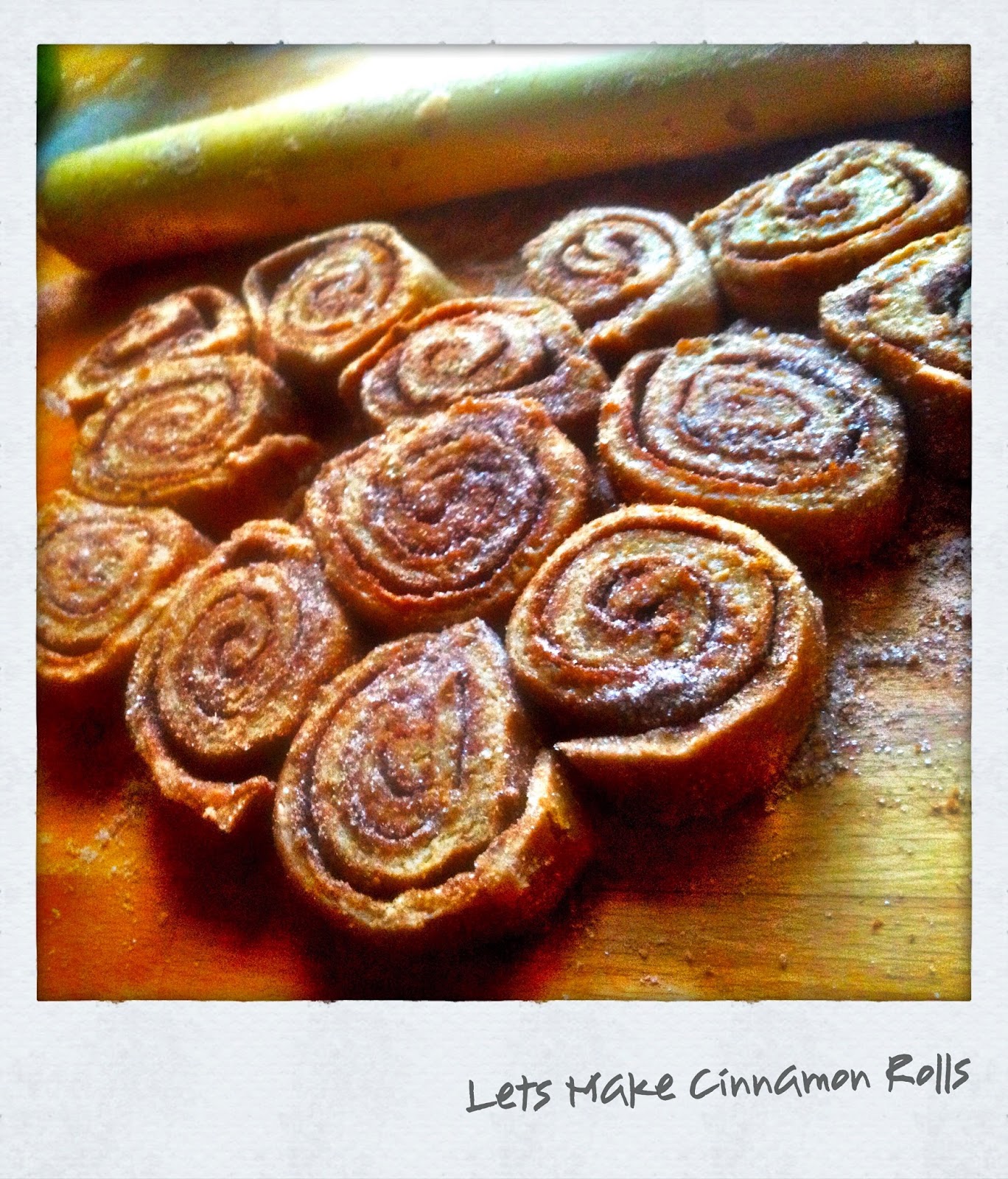 Ideally you want to roll the dough out in a rectangle. This never works for me, though, so it’s only a suggestion to make it easier to get your rolls sized evenly. In any case, just roll your dough out until it’s as thin as you can get without it falling apart. You can check this by lifting the sides to test.

Once the dough is rolled out, cover it with a thin layer of melted butter. I spoon it on and rub it around with my hands.

Using a large sharp knife (not serrated) slice the rolled dough into approximately eight fairly even slices. Place on baking sheet lined with baking paper. Sprinkle the tops with any sugar mixture that escaped while rolling out the buns.

Allow the rolls to rest for at least an hour before baking. At this point you can also allow them to rest in the fridge, covered in plastic wrap for a day or two before baking. 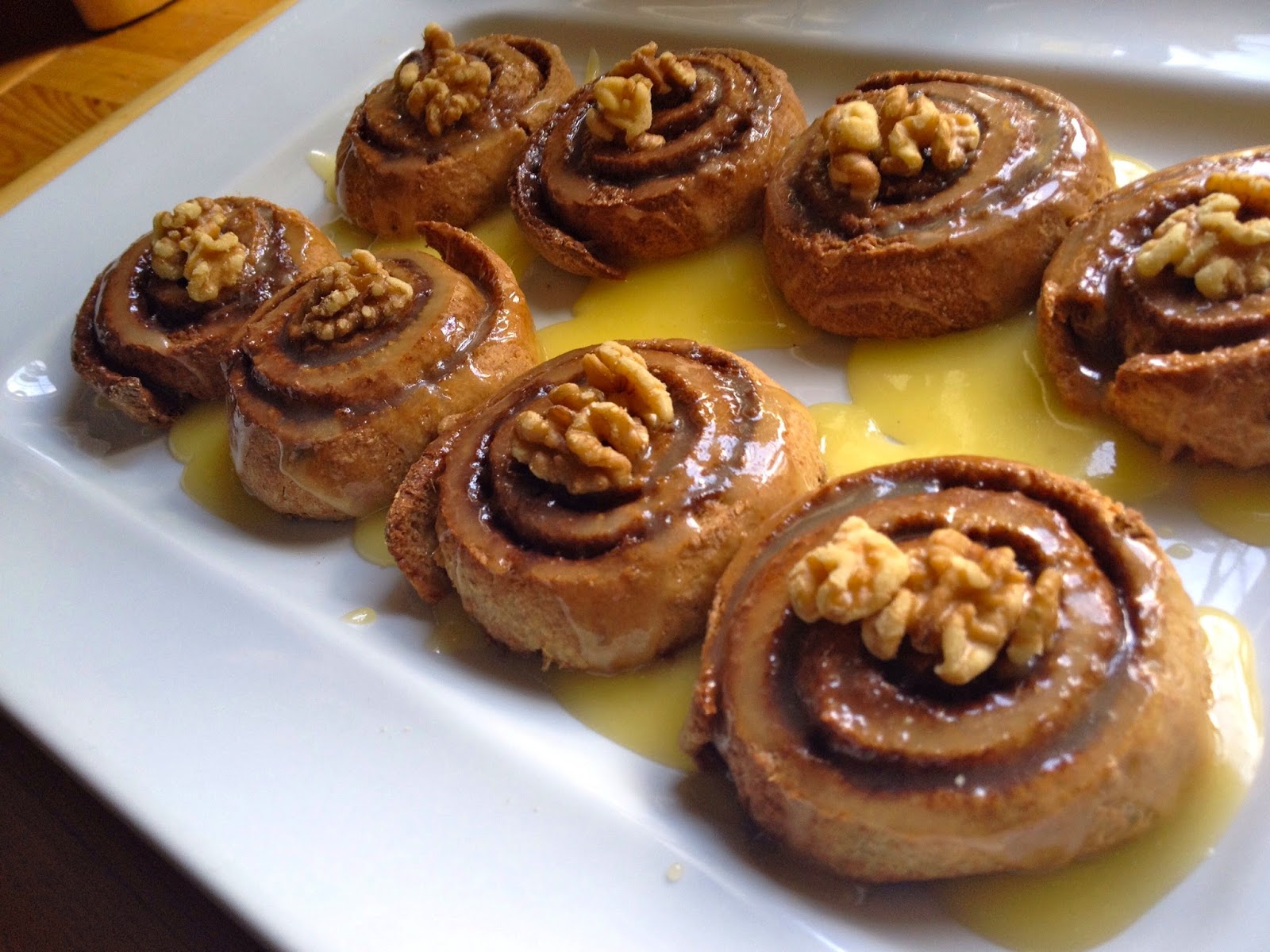 When you’re ready to bake, heat oven to 175c/350F. Get a second baking tray, fill with 500ml of water (about 500ml or a couple of cups) and place in bottom of oven. This will make steam giving the rolls a softer texture which really makes a difference.

Place the rolls above the water tray, in the center of the oven and bake for approximately 18 minutes. Because spelt is dark it’s hard to visually see when the rolls are baked through - but 18 - 20 minutes should do it. You don’t want to overbake them.

Allow rolls to cool for about five minutes, then transfer to a large tray or platter and glaze. I usually spoon the glaze over the top of each roll while they’re still quite warm because I love to eat warm rolls. Top with a bit of walnut, or your choice of nut.

You can also dip the rolls in the icing, but only when they’re fairly cool to touch. They can stick a bit to the surface once they're cool. Just lift gently with a butter knife. If serving later, allow to cool completely, then store in an airtight container. I often bag them up for sharing/transporting in individual zip lock bags. 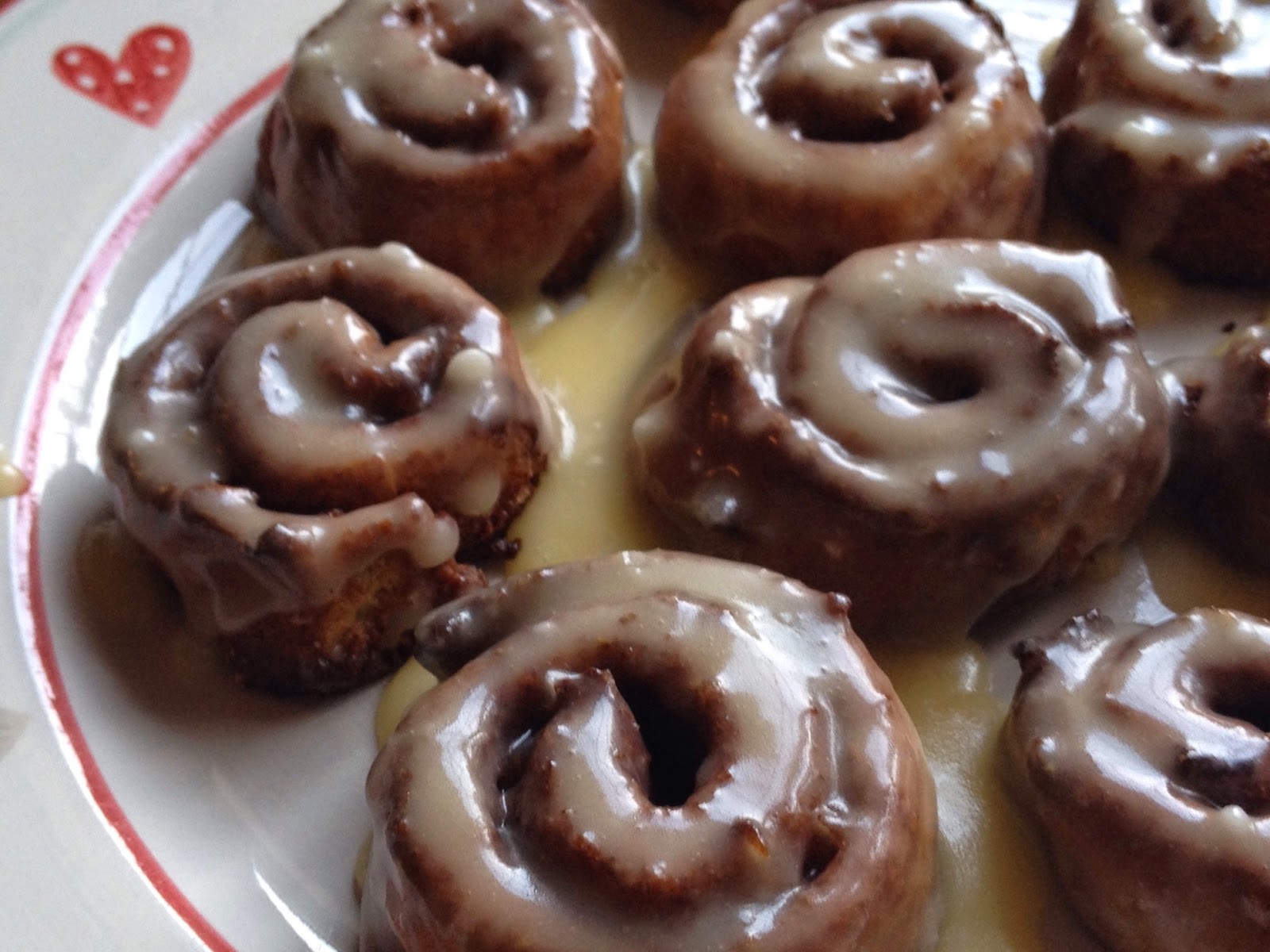 If you’re baking all 24 rolls at once, while the first batch is baking, prepare the next batch.

Like all recipes, experiment and make this your own by varying the size of your rolls, the kinds of nuts you use, and your choice of flavourings (orange, lemon, almond, cherry, rose, etc) There’s easily a dozen variations depending on what inspires you.

The rolls freeze well. If you want to make some for later, simply bake and freeze, glazing after you’ve thawed and gently reheated in low oven, wrapped in foil.

For an easy, casual brunch consider serving cinnamon rolls with a crustless quiche (recipe here) or with a platter of deviled eggs, served on a bed of freshly cut cress.

I am especially fond of fennel tea and find it compliments cinnamon rolls beautifully, as does pressed apple juice, fresh squeezed orange juice and lemonade with a splash of lavender essence.

You can easily turn your cinnamon rolls into a charming pull-apart cake by nestling them snugly into the bakeware of your choice. This is especially fetching as a gift, as you can make the baking dish containing your treat part of the gift. As everyone loves the smell home baking, you might want to bake them at your recipient’s home, bringing the icing in a ziplock type bag. After the rolls are baked and cooled for a few minutes, simply snip off a small corner of the bag and squeeze the icing over the rolls. Candles optional. 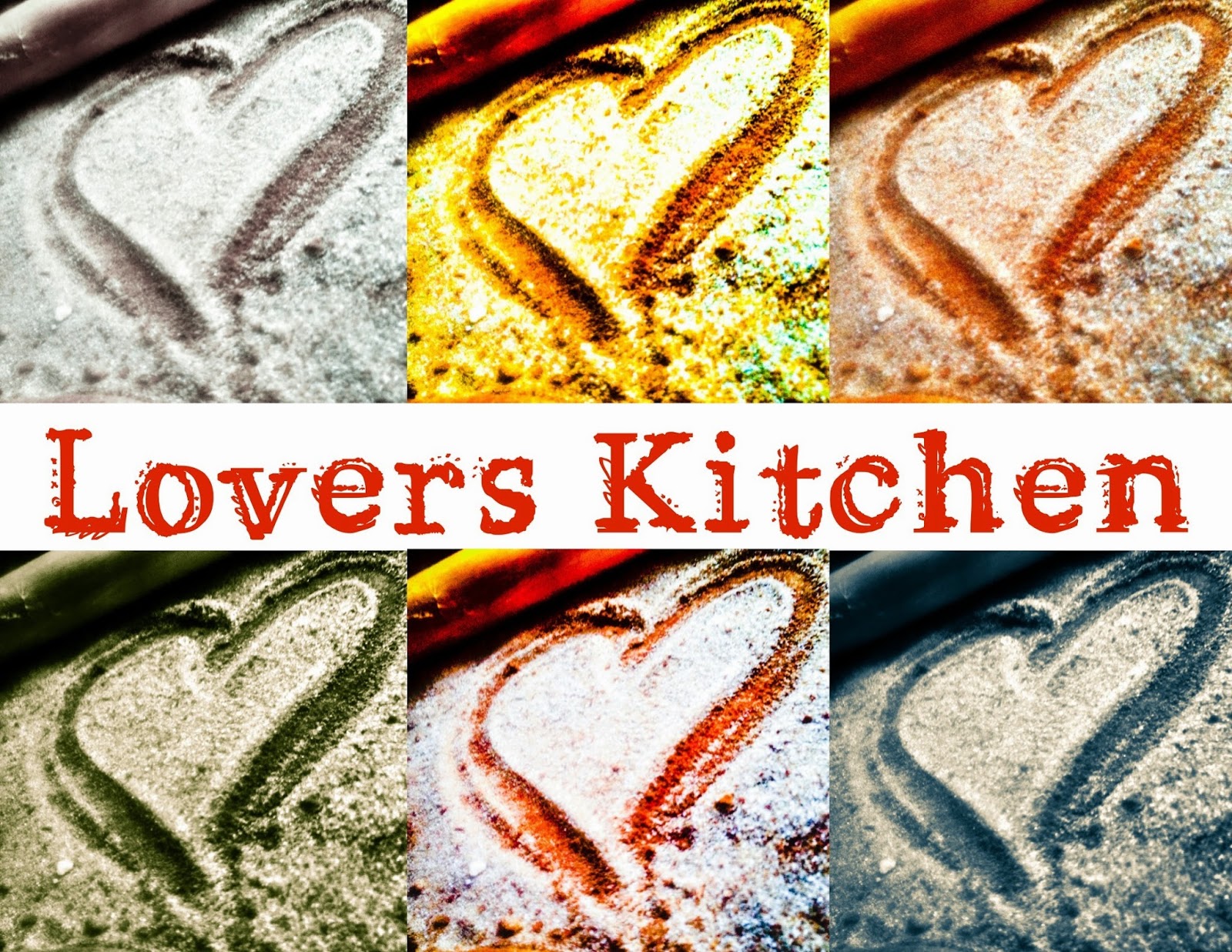