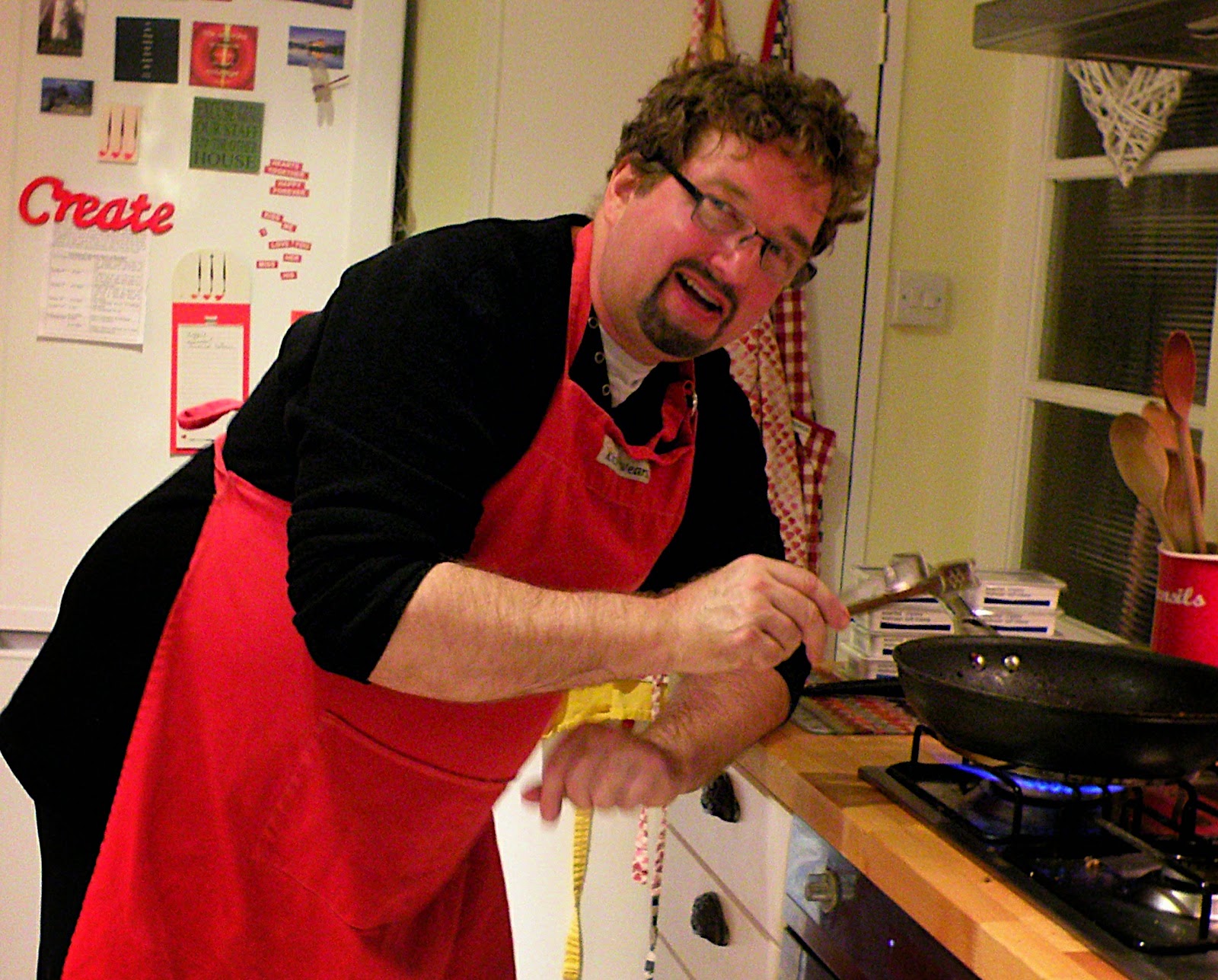 Legend has it that Clint Eastwood first introduced spaghetti to the West, but I've been finding it hard to get anyone else to own up to believing it.
Regardless if it was Clint or (he whom most folks seem to think is the culprit) Marco Polo (circa 1295) who introduced it, the word spaghetti comes from the word Italian spago (string) because of its shape.
We’re going to enjoy a whole lot of practical string theory in today's culinary offering.

We've been experimenting, a la Thomas Jefferson, with using meat as a condiment, rather than the star of a dish, and this dish is a good illustration of that. Just a small amount of the "carbonized" bacon adds lots of flavor. 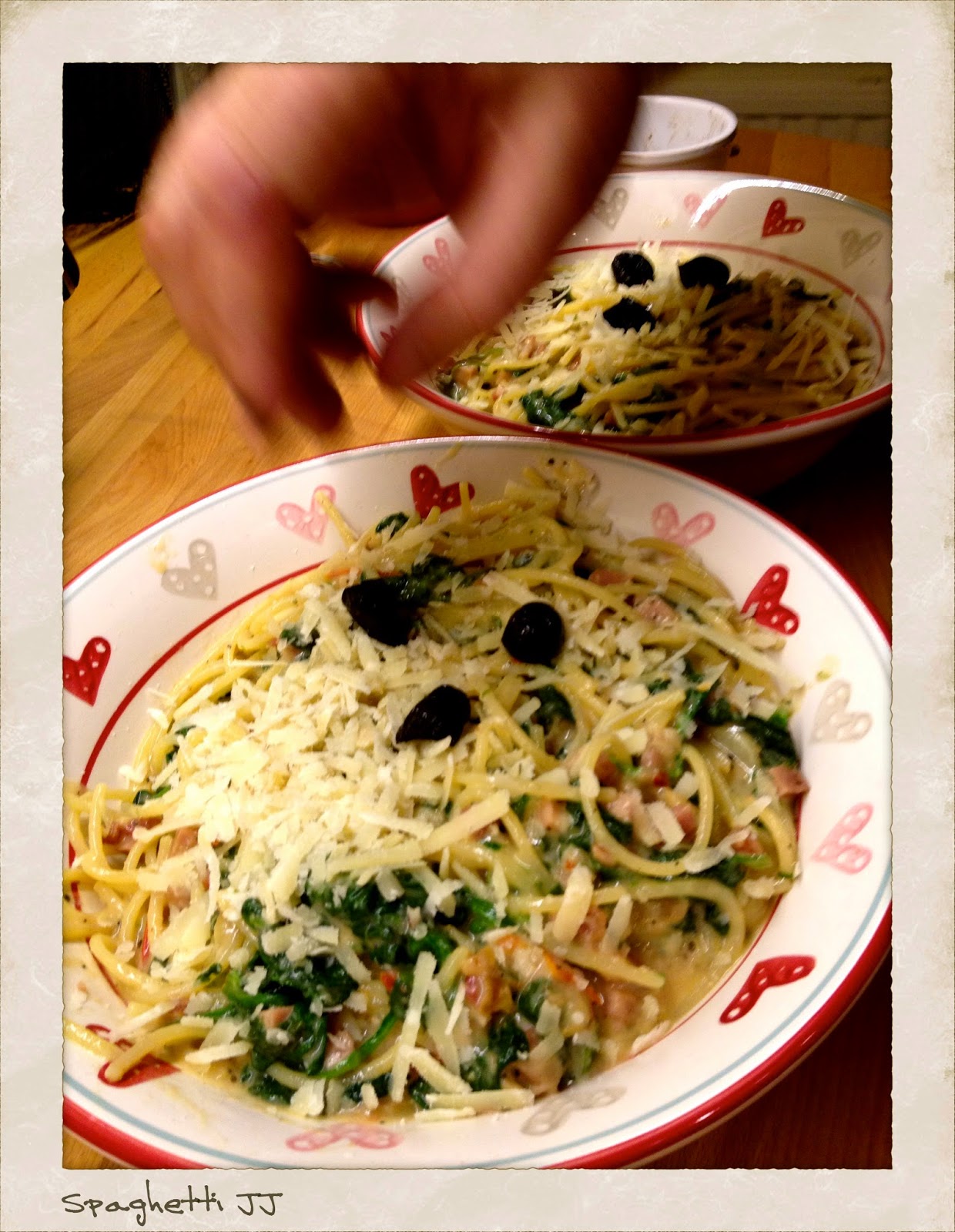 * We love garlic and find it not only tasty, but also a potent aphrodisiac and an excellent way to keep vampires at bay; so we often use two heads. 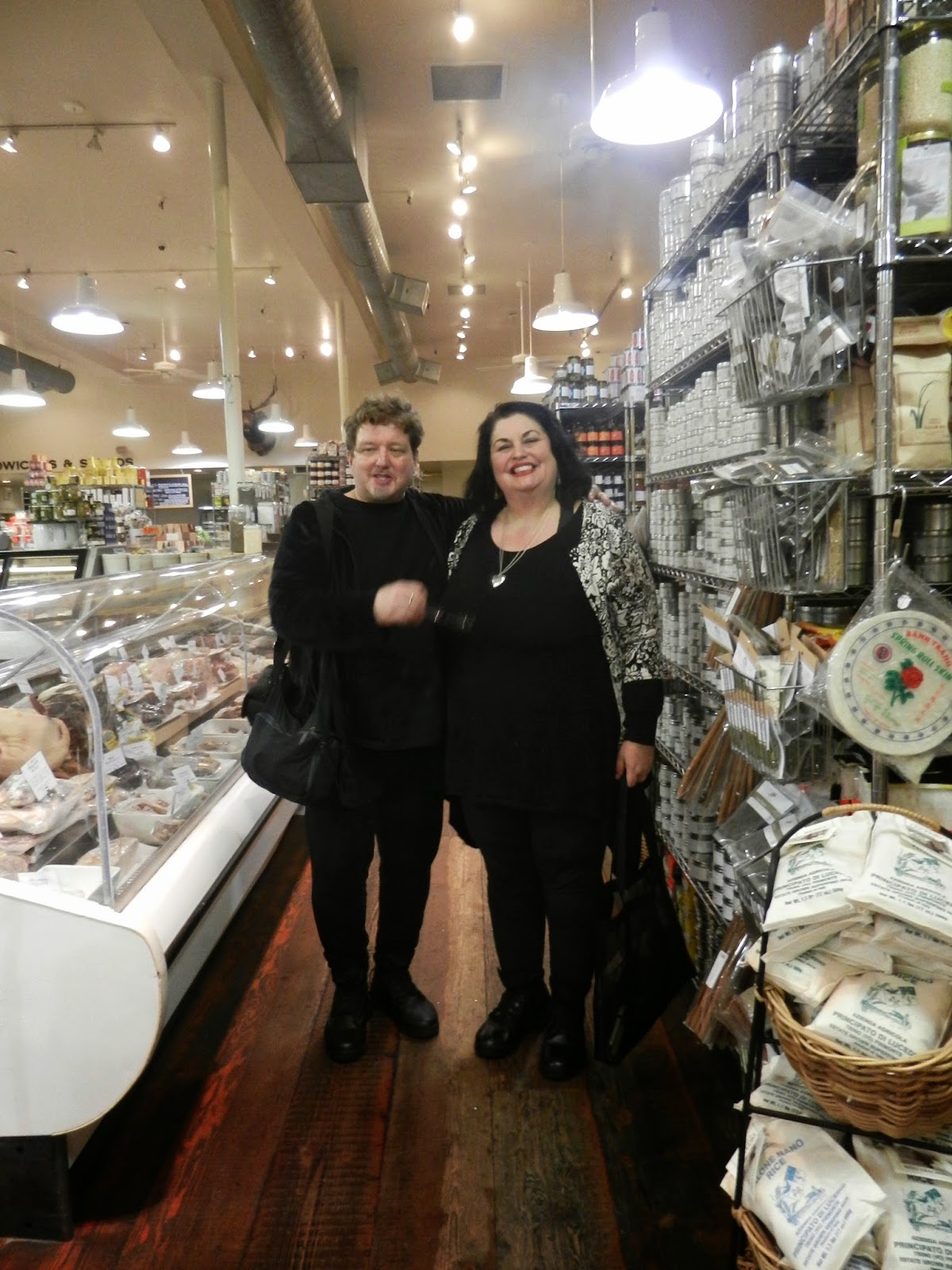 Fry the bacon, drain it of grease and remove any remaining fatty bits while dicing the it into small pieces (about 1/2cm 1/4" squares)

Alternatively to frying the bacon, you can roast it on high heat, turning it once or twice as it cooks.  Marsha finds this produces a dryer tastier bacon that needs very little draining.

Peel the garlic and cut it into thin slivers (as opposed to a rough chop) and place on baking sheet  Toast the garlic until it is no darker than a light brown. You’ll know it's ready if it has a little crunch to it when you try a piece.

Set bacon and garlic aside for the nonce.

Put a large pot of water on to boil.  Add 1 tsp salt to the boiling water (which is to but speed the boil and is not done for taste here) add the spaghetti and when the water comes back to the boil, cook at a constant simmer, covered, for 10 minutes or until al dente. 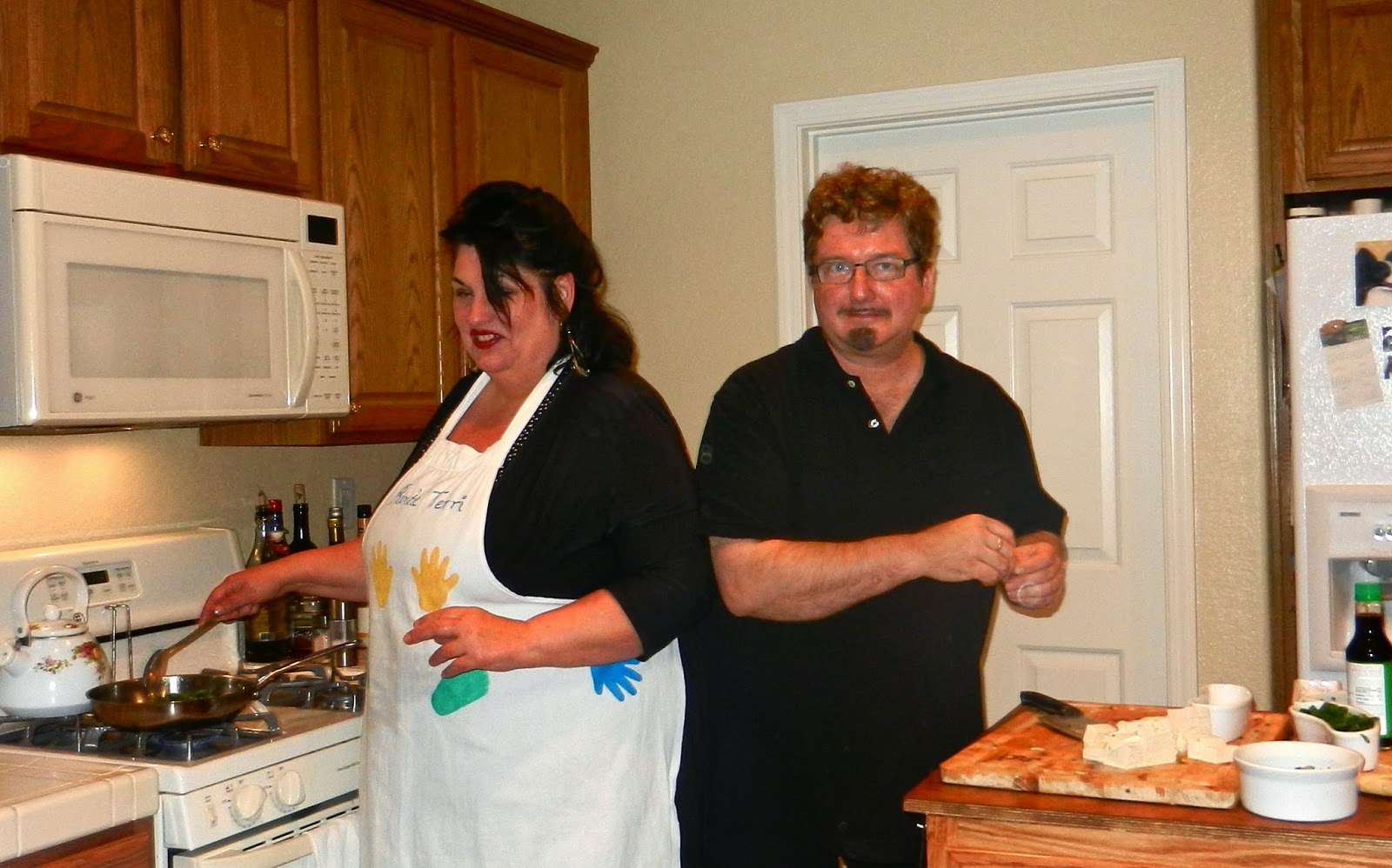 Wash spinach, drain, and wilt it by pouring boiling hot kettle water over it, in a colander in the sink.  Use a flat wooden spoon or potato masher to remove as a much water from the spinach as possible.

Into a wide frying pan, add olive oil; then bacon; than spinach and fold these into each other, allowing the nuttiness of the oil to infuse.  Keep the heat on low.

When pasta is al dente, lift it from the water with a pair of tongs and put it in the frying pan with the pancetta. Don’t worry if a little water drops in the pan as well (you want this to happen) and don’t throw the rest of the pasta water away. Thoroughly fold in the spaghetti into the spinach and bacon mixture.

Mix most of the cheese in with the eggs, keeping a small handful back for sprinkling over later. Take the pan of spaghetti and pancetta off the heat. Now quickly pour in the eggs and cheese and, using the tongs or a long fork, lift up the spaghetti so it mixes easily with the egg mixture, which thickens but doesn’t scramble until everything is coated. 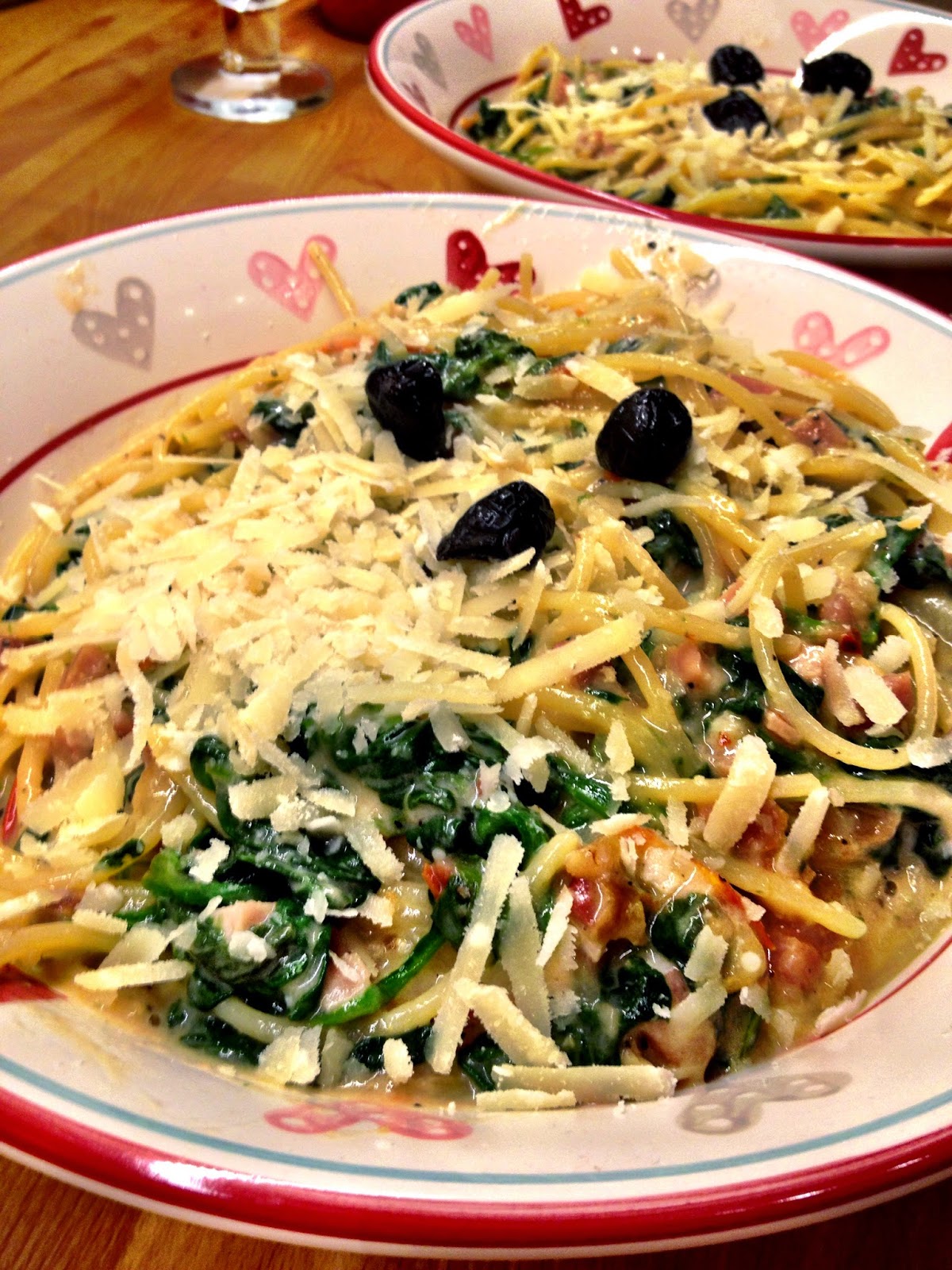 Add extra pasta cooking water to keep it saucy (several tablespoons should do it). You don’t want it wet, just moist.

If the dish does get a little dry before serving, splash in some more hot pasta water and the glossy sauciness will be revived.

Enjoy in large bowls with a good chianti and sing some Verdi if the spirit moves you. 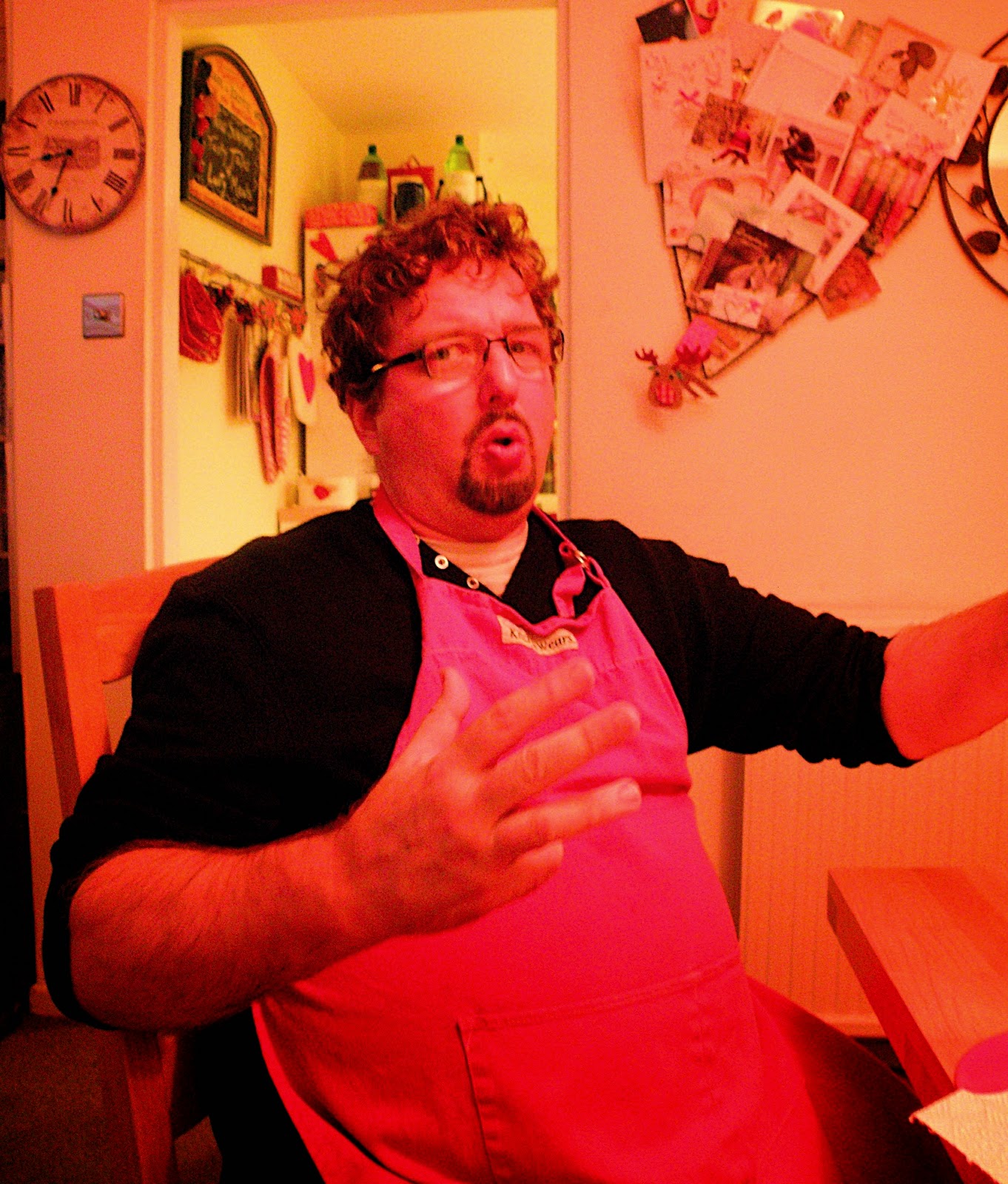