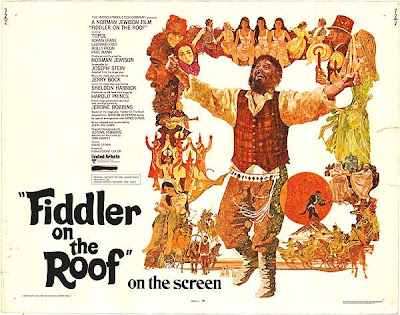 I saw the film version of Fiddler on the Roof, for the first time, in the early 80’s. We spotted it in the musicals section of our local video store. Renting for 99¢, we brought it home, popped a bowl of buttery popcorn and sat down in front of the television, ready to be entertained. Two hours later, the popcorn largely untouched, we laboriously re-wound the tape and watched our favourite parts again.

In a musical packed with unforgettable songs like “If I Were A Rich Man” and “Sunrise Sunset,” “L’Chiam” became my song.

Eventually, I bought the movie and the soundtrack (on tape, CD, MP3, MP4 . . . ) Thus far, I have resisted the temptation of setting up L’Chaim as my mobile’s ring tone. This has more to do with technological shortcomings, than feigned reverence for the song, though reverence it I do.

Joseph Stein, author of Fiddler on the Roof, died late last year in New York. He was 98, which means he was 52 in 1964, when Fiddler opened on Broadway.

Fiddler was based on the stories of Sholom Aleichem (pseudonym of Sholom Yakov Rabinovitz) Maybe this is one of the reasons it makes for compelling viewing. It is, like all good plays and films, a storyteller’s story. 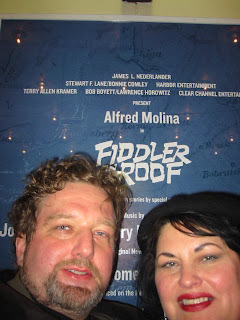 I saw the film, long before I saw the musical on Broadway. While it was thrilling to see Fiddler live from a comfortable box seat in New York’s finest theatre, Alfred Molina (an exceptionally talented actor) did not own the role of Tevye, as Chaim Topol had done. The only actor who can give Topol a run for the money as Tevye, is JJ. JJ lives Tevye.

The songs of Fiddler are as much about the story as the story itself. When my daughter, Antoinette, was a little girl, she loved dressing up and performing the film’s ambitious dream scene. A few years later, after seeing Barbara Streisand’s film, Yentel, Antoinette briefly changed her name to Yentel and took to wearing a hat everywhere. Granted, this might have had more to do with Boy George’s influence, than living with a mother obsessed with Jewish musicals.

Fiddler, like Yentel, is a story about identity, about making a place for oneself in the world. It’s about prejudice and loss of home. It’s about overcoming adversity. Most of all, it’s about not allowing others to define you. It’s about mustering up enough self belief to live bravely. 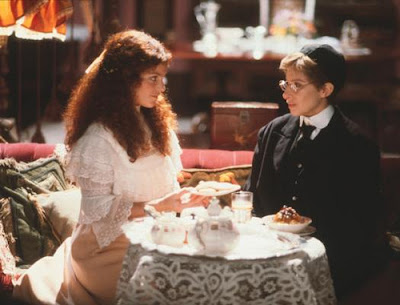 Food plays a memorable role in both Fiddler and Yentel. In Yentel, Amy Irving is forever defined in my mind as Hadass, maker of perfectly shaped almond cookies. Hadass’s family also regularly uses dinner, as part of a complex courtship ritual. Not that food and courtship hasn’t been the most natural of pairing since the beginning of time, most of us have a good meal to thank for being here.

In Fiddler, Golde and Tevye want their eldest daughter, Tzeitel to marry the butcher, Lazar Wolf, so she will never know hunger. In the movie’s funniest scene, Tevye thinks the butcher is negotiating for his milk cow, when he is, in fact, asking Tevye for his daughter’s hand in marriage.

Later, at Tzeitel’s wedding reception, the butcher, smarting from losing her to the tailor, announces he is giving the newlyweds two chickens. This was a generous and welcomed gift.

With the wolf forever at their door (not Lazar Wolf) Golde marshalls her husband and daughters around the table for the traditional shabbat dinner. The candles are lit and briefly the family is relieved from the tedium of their lives.

Just as in real life, food brings everyone together. It is a mark of faith; an important part of courtship and family life. It lubricates conversation and raises the spirits. It provides sustenance for body, mind and soul. I know of nothing else that gives so much, for so little effort in return.

One of my favourite Jewish inspired foods is potato latkes. A food processor speeds up the process considerably, but JJ and I used to make batches of these using a basic box style grater. Traditionally, they are served with applesauce. I like them better with eggs, salmon, or sacrilegiously bacon. 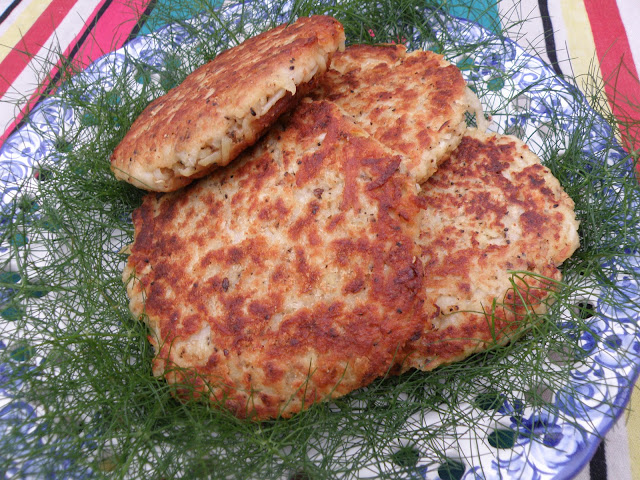 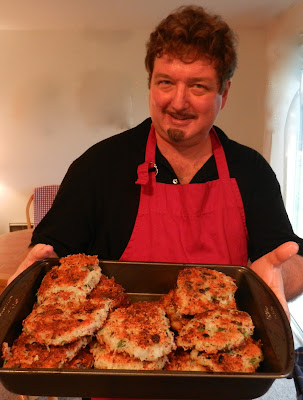 Peel and grate onions and potatoes. Place grated vegetables in large colander, in the sink. This allows excess juice to seep out, while you continue with the rest of the recipe.

Pour breadcrumbs on a large flat tray. Gently press and shape each latke in the breadcrumbs until you have a patty.

Bake in hot oven approximately 90 minutes, turning once half way through the process.

Press and pat potato ball into well-rounded pancake. Gently place pancake into skillet. Press pancake gently with heat-proof, rubber spatula, to even out cooking surface. Cook 6 - 7 minutes on each side, or until crispy brown. Once the first side is cooked, flip gently with spatula to fry other side.

As the pancakes are cooked, place them on baking sheet, keeping warm in low oven until ready to eat. 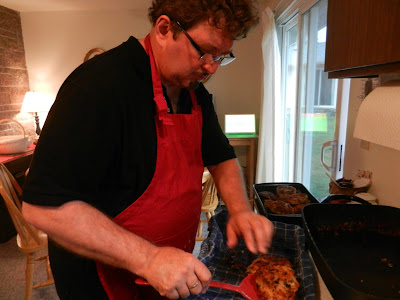 Since Richard and I usually have breakfast for dinner on Sunday evenings, I can’t think of a better way to kick off the week than slipping into your best pajamas and making a batch of latkes.

Wrap a potato pancake, with a plain omelette and serve on a bed of freshly cut fennel, for an especially appealing meal.

Pair latkes with wild salmon and a side of velvety scrambled eggs.

If you like your food on the spicy side, consider adding a cup of chopped chilies to the latkes. Red ones look best. I often use grilled Italian peppers, which aren’t spicy, but add another dimension to the pancake.

Latkes can be made a day or two in advance, then slowly reheated in oven before serving. Small ones (this recipe will make at least 12) are excellent for buffets and parties.

Don't forget to fire up the DVD player and treat yourself to the best musical of all time. A winter evening watching Fiddler on The Roof, while noshing on latkes is the best kind of indulgence.