This Sunday afternoon, thousands of neighbours all over Britain might be lunching together. The idea is being touted under the promising banner, “The Big Lunch.” Organizers of The Big Lunch have a website and publicity team to help community minded folk host street parties. While it doesn't look like our neighbourhood is getting together Sunday, we often invite neighbours around for feasting and conversation.


One of my favourite big lunches is a tray of herby roasted vegetables (onions, garlic, potatoes, peppers, tomatoes and herbs) doused in olive oil, with a splash of lemon juice, and assortment of sausages. 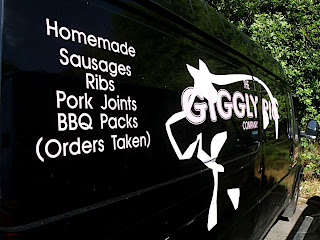 We buy organic sausage from The Giggly Pig Company, recently discovered at the Farmer's Market. Their slogan is: “There’s No Fat or Crap in our Sausages.” Appetizing, no? 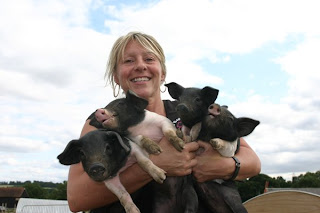 Owner, Tracy Mackness (shown here with four of her babies) fell for British Saddleback Pigs, while working with them in prison. When she got out of the pen, she devoted herself to raising these handsome pigs, harvesting their porky goodness for sausages, bacon and ribs.

In the states, JJ and I usually rustle up Aidells Organic Sausages: Sweet basil and roasted garlic; habanero and green chile, and andouille are favorites. 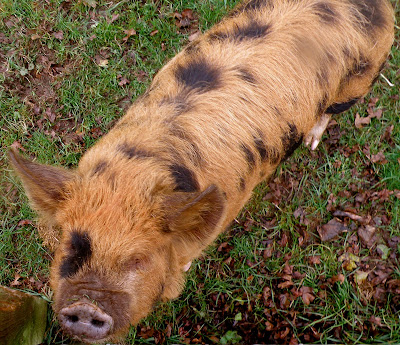 Peel and slice onion and garlic. If you have a food processor, speed up the job by using the slicing blade to slice everything. If you don’t, slice the vegetables on the thin side by hand. Toss them on the baking tray and begin roasting on hot grill, or oven.

Wash peppers, potatoes and tomatoes. Cut peppers in half. De-seed and slice. Toss onto roasting pan with onions and garlic. Stir around to coast with oil. 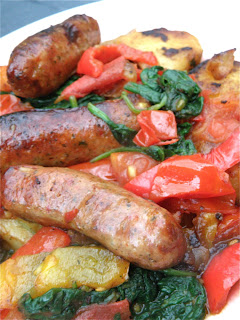 Slice tomatoes into quarters. When vegetable are tender and mouthwateringly roasty looking, add tomatoes to the pan.

Serve with an assortment of mustards (French; American; English) British ales, crisp white wine (Dourthe No.1, an inexpensive Sauvignon blend, from France, is good with this) and sparkling water, with slices of lemon.

Tastes even better with a bit of Celtic/Irish music.
Posted by Marsha Coupé at 7:47 pm